New Delhi: Fear-mongering, borderline hate-speech and mob incitement through clever prose. A quick look at belligerent Bharatiya Janata Party leader Kapil Mishra’s Twitter timeline reveals much about the tactics used by the former AAP minister to rise through the ranks as a vocal supporter of right-wing narratives.

On Wednesday, the Delhi High Court ordered an FIR to be filed against Mishra after three days of communally-charged violence in the capital.

Mishra, who lost the recent Delhi Legislative Assembly elections which from Model Town, is currently in the eye of the storm after his viral “ultimatum” to Delhi Police in North-East Delhi’s Maujpur. While the nation was deep in anticipation and preparation for Donald Trump’s maiden India visit, Mishra addressed his followers and supporters of the contentious Citizenship Amendment Act on Sunday and gave Delhi Police three days to flush out anti-CAA protesters from the city’s streets.

The speech preceded one of the most violent communal clashes the city has seen in over three decades. By Sunday night, several minority-dominated neighborhoods in northeast Delhi — an area which saw rampant divisive campaigning in the run up to the elections — were burning as mobs clashed with each other, torched shops, homes and vehicles, fired shots and caused damage to life and property. The death toll reached 22 by Wednesday evening.

But even as authorities scrambled to restore law and order in the capital, many demanded the arrest of Mishra, who is being accused of inciting the violence. Mishra has held his ground on Twitter, declaring repeatedly that he did nothing wrong, and rallying support on social media. His involvement was also questioned in court on Wednesday when a High Court bench ordered an FIR to be filed against Mishra and others for hate speech.

And yet, Mishra’s statement comes hardly as a surprise to those who have followed the former AAP leader from the time of his rise in 2015. Interestingly, Mishra boasts of more Twitter followers than even BJP president JP Nadda.

From Kejriwal Protégé to Right-wing Hero

Mishra, who volunteered for the India Against Corruption (IAC) movement, was young and energetic and quickly rose through the ranks after becoming an MLA from Karawal Nagar constituency (one of the areas that saw severe violence since Sunday). In fact, despite his sharply pronounced ideological tilt toward the right, Mishra who had a background in public policy campaigning from his experience with Greenpeace and Amnesty, soon became known as one of the “young turks” of the party.

Though he lost in 2013, Mishra was inducted into chief Arvind Kejriwal’s seven-member cabinet as Delhi’s Water Minister at age 34 after AAP swept elections in 2015 and made news by taking his oath in Sanskrit. Apart from water, he was also given charge of tourism and Gurudwara elections, as well as art, culture and languages. He was even given the additional charge of the law department after Jitender Singh Tomar’s arrest but was relieved of it in two months.

His “activist-like” approach made him very popular as a leader in AAP, a party that grew out of a populist anti-corruption movement. During his tenure, Mishra had repeatedly raked up the Rs 400 crore water tanker scam and alleged erstwhile Sheila Dikshit-led government of irregularities in hiring 385 private water tankers to supply water in areas without access to piped water.

While a minister with AAP, Mishra was known to make incendiary remarks even against Prime Minister Narendra Modi himself whom he infamously called “an ISI agent”. In 2016, Mishra tweeted, “Do we have a ISI agent as PM now?? Its very serious the way PM is surrendering to anti India forces?” His tenure also saw him work for environmental and labour.

By 2017, following AAP’s defeat in the MCD polls, the ideological and political differences between Mishra and AAP as well as Kejriwal ended in a public fallout and led to the minister’s dismissal from the post as well as party. Mishra, who has a penchant for controversial statements, supported poet and former AAP leader Kumar Vishwas. The latter had been a vocal opponent of AAP as well as Kejriwal. While the apparent reason for sacking Mishra was his poor performance in the water ministry which seemingly cost AAP the elections, many insiders at the time surmised that the open support of AAP’s dissenters cost him. Following his dismissal, Mishra went on to accuse Kejriwal of corruption.

After his stint with AAP, Mishra whose mother Annapurna Mishra is the former East Delhi Municipal Corporation Mayor and BJP leader from the area, immediately started making overtures at BJP with the “My PM My Pride” campaign. The campaign played out heavily on social media (which also served as a platform for its mobilisation and promotion) and was a precursor to his joining the party in the same year.

Since then, Mishra has often made problematic statements both on and off Twitter. It was after joining the BJP that his tweets became pointedly more biased toward right-wing ideology and Hindutva. Mishra has repeatedly made communal comments against Muslims that were often slammed for being Islamophobic. In October last year, Mishra tweeted an image of a Muslim family, including burqa-clad women, and referred to the community as “pollution”. 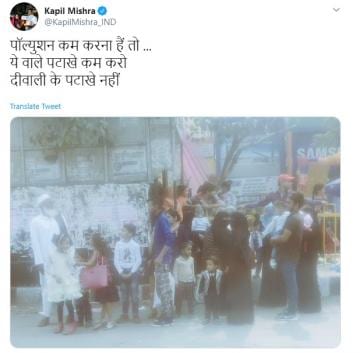 In the run-up to the Delhi elections in 2020 when the city was witnessing several anti-CAA protests, the former graduate from Delhi School of Social Sciences received a rap from the Election Commission after he led the now infamous “Desh ke gaddaro ko, goli maaro sa**o ko” slogan against anti-CAA protesters in December. In January, he tweeted that Pakistan had entered Shaheen Bagh and that anti-CAA protesters were turning Shaheen Bagh into a “mini Pakistan”.

Mishra was also slammed for calling Delhi elections an “India vs Pakistan” cricket match and for referring to AAP as “Muslim League” as it shielded alleged anti-nationals. The criticism did little, however, to stymie Mishra’s communal tirades.

Seemingly a sore loser, Mishra who was unable to beat his AAP opponent from Model Town and lost with over 8,000 votes, was back to his tactics within days.

Since Sunday, Mishra has constantly been tweeting contentious messages aimed at mobilising support for his provocative actions in Maujpur.

On January 23, Mishra who has been politically active in North East Delhi from a young age, tweeted that he will not let “another Shaheen Bagh” happen in Delhi. He kept tweeting appeals to CAA supporters to gather in large numbers in Maujpur. He also accused “Muslims” of blocking areas. As violence grew and videos of religious buildings being vandalised went viral on Tuesday, Mishra tweeted to AAP, aksing why “maulvis” (Muslim priests) who were on AAP’s payroll were not stopping the violence.

He also constantly sparred with journalists and critics with divisive narratives, invoking stone-pelting in Assam and Kashmir and accusing only anti-CAA protesters of violence.

On Tuesday night, as the violence was somewhat contained, Mishra posted a video of Jaffrabad where the Muslim women protesters had been sitting in peaceful protest since January until violence broke out on Sunday evening. Mishra’s Maujpur video was shot just a little distance from the spot which became one of the hotbeds of rioters. In the now deleted video, Mishra wrote, “Jafdrabad has been emptied. There will not be another Shaheen Bagh in Delhi”. 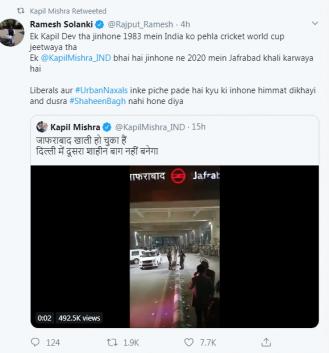 On Wednesday, the Delhi High Court heard a plea seeking an FIR against those involved in the ongoing violence in northeast Delhi and ordered the incendiary speech made by BJP’s Kapil Mishra to be played in court.

Nevertheless, the BJP leader continued to tweet, calling for the arrest of a minority man after the body of an IB officer was found in Chand Bagh.

Following BJP’s dismal performance in Delhi polls, many senior leaders, including Amit Shah, noted that incendiary statements may have worked against the party’s favour. Following the violence in Delhi, his party colleagues have once again condoned communal comments. But the leader remained unfazed.

With his sensationalizing and often polarising tweets, Mishra joins the fast growing ranks of social-media savvy right-wing politicians and BJP members such as its defeated Hari Nagar candidate Tajinder Singh Bagga, who rely heavily on social media for self promotion and mobilisation of support. With over 7 lakh followers, Mishra’s Twitter page gives a glimpse at the leader’s political strategy, especially among the youth. His posts and tweets get 30 to 40 thousand likes and thousands of retweets with videos going viral in an instant. In a disturbing pattern, it can be observed that tweets with sharper communal or divisive undertones performed better in terms of likes. Among his followers on Twitter, Mishra is often known as “Hinduo ka sher” (the lion of Hindus).